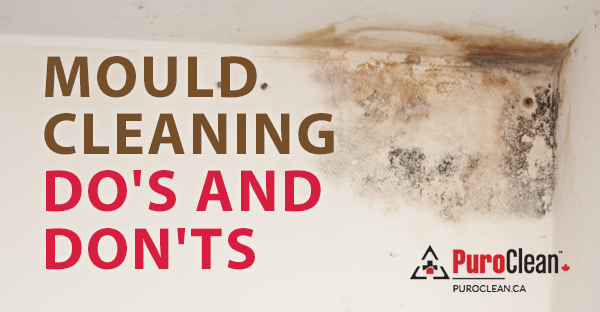 Mould often grows in buildings where moisture levels are not kept under control. This type of fungi can cause respiratory health issues and property deterioration. Thus, it’s important to know how to prevent mould, as well as how to remove mould. Once faced with a mould problem, property owners need to decide whether to attempt to clean it themselves or call a professional. Here are our recommendations.

How to remove mould

As Benjamin Franklin once said, “An ounce of prevention is worth a pound of cure”. In other words, immediate action is essential in stopping a mould problem before it escalates: follow our 10 Best Tips for Mould Prevention.

Efforts by well-meaning homeowners can actually exacerbate mould growth. Also, using UV light or high-heat drying has only temporary benefits and can be harmful to people, pets, plants, wood, and plastics. And, consumers are often confused by thinking that mould-resistant means mould-proof. It does not.

PuroClean’s mould removal services are comprehensive, encompassing mould remediation, mould and mildew odour removal, as well as cleaning and sanitation. This process is done by PuroClean technicians, trained and certified in the latest technologies. We work with environmental hygienists and laboratories to protect families and businesses from dangerous mould situations. For mould removal services, call PuroClean right away!