Health and Safety Concerns After a Natural Disaster 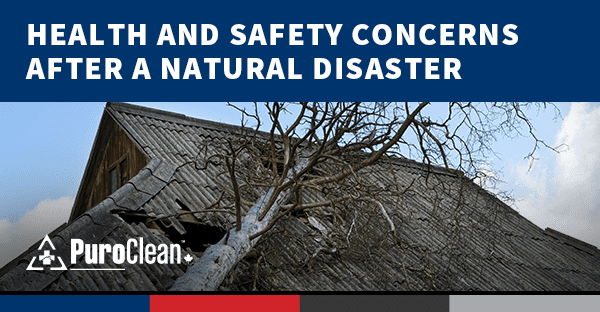 During a natural disaster, being safe is the number one priority. Many people who experience natural disasters face possible unhealthy living conditions as well as a damaged home and belongings. Hazards such as stagnant water containing bacteria, mould growth, and environmental toxins may have harmful, long-term consequences to health.

Mould can also worsen conditions like asthma or chronic obstructive pulmonary disease. Mould growth can begin within 48 hours without proper cleaning, so quick action is important to clean mould before it spreads too far.

People often talk about environmental toxins like lead and asbestos in the home as safe until damaged or disturbed. The unfortunate truth is that natural disasters like hurricanes or fires will cause that damage, creating one more thing for homeowners to worry about.

Asbestos is a mineral that once had many uses in the home, including insulation, siding, shingling, tiling, furnaces, and more. The fire-resistant elements of asbestos made it prime construction material until it was discovered that asbestos can cause many respiratory problems including mesothelioma.

The largest concern with lead is slow mental and physical development in children if they are exposed. One example is when chippable lead paint is in reach of children such as on windowsills or banisters. Lead and asbestos are likely to be present in any home built before the 1970s, unless previously abated.

Hurricanes and fires could create the problem themselves, or damage may happen during the clean-up process. Tearing up flooring or knocking down damaged walls that contain asbestos or lead might release lead dust and asbestos fibers in the air.

The bottom line is – ingesting or inhaling these microscopic toxins could cause health issues for years to come.

Sometimes, floodwater contains toxins that contaminate water from landfills, chemical plants, and sewage. Stagnant water outside or in the basement may contain a host of bacteria. If it comes in contact with a cut or other open wound, this contaminated water can cause gastrointestinal problems or even infection.

Avoiding potential health hazards during restoration after a natural disaster can be difficult. Protective gear such as face masks, boots, and rubber gloves is necessary. Another risk is the unpredictability of what lies behind damp walls and beneath damaged carpets. Bacterial infection and lead poisoning are not to be taken lightly. Safety is the most important thing, so let the experts clean and restore your home properly, quickly, and safely.