Can a Dehumidifier Kill Mould in a Home? 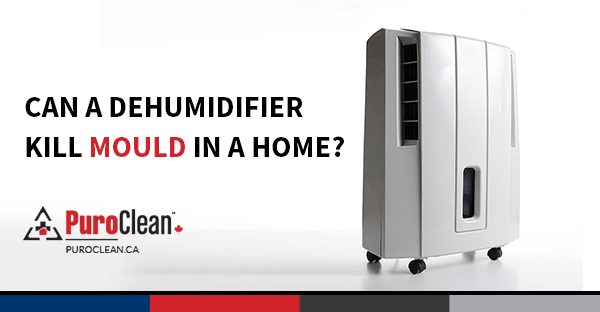 Water leaks in a property need to be fixed as soon as possible, otherwise mould will start growing and turn the property into a fungi nightmare. When property owners deal with a mould problem, they might think that a dehumidifier could get rid of the mould. But are dehumidifiers efficient at removing mould? Learn more below.

What is a dehumidifier?

Dehumidifiers are portable devices that pull moisture from the air, decreasing the dampness in a room. Ideally, the home should have a relative humidity between 30 and 60%. This improves comfort and decreases health risks. A hygrometer should be used to monitor the humidity in a home.

Does a dehumidifier remove mould?

Removing all mould spores from a home is nearly impossible. Mould stays “dormant” in the air or on surfaces even if there’s no excess moisture to help it grow. If the humidity in a room increases, mould will start growing in patches on walls, clothes, and more. Thus, dehumidifiers do NOT kill mould, but they do help prevent it by reducing humidity.

Any mould problem in a home must be treated immediately since mould spreads as long as it has a water source. The mould should be removed and the moisture source (leak, condensation, high humidity, etc.) should be fixed to prevent more damage and costly repairs. A professional restoration company should be hired to efficiently deal with the mould and the moisture problems.

The benefits of using a dehumidifier

Besides helping to prevent mould growth, controlling the amount of moisture in a home has health benefits. Dust, mould, pet dander, and other allergens can overtake the home if indoor humidity is too high. Dehumidifiers help reduce these indoor pollutants that can cause allergy triggers such as stuffy nose, itch eyes, sneezing or skin rashes.

In addition, dehumidifiers reduce the musty odours linked to high humidity. Dehumidifiers also protect wooden items from moisture. Too much moisture in a home can damage furniture and hardwood.

How to choose a dehumidifier

Choosing the right dehumidifier depends on the humidity in the area and how much moisture is released in the home. It’s best to have one installed in the basement, bathroom or kitchen where humidity levels are higher.

To conclude, using dehumidifiers doesn’t kill mould in a property but it can prevent mould by reducing humidity. To get rid of mould in a home, it must be removed physically using equipment and cleaners. The PuroClean team stands ready to provide professional restoration services to any property affected by fire, water or mould damage.